The one thing I will always remember Tbilisi will be that it was the first destination I had visited out of India which was not clubbed as a business/official trip. The choice of Tbilisi was primarily due to the fact that as an Indian passport owner residing in the UAE I did not require a visa to visit Georgia. 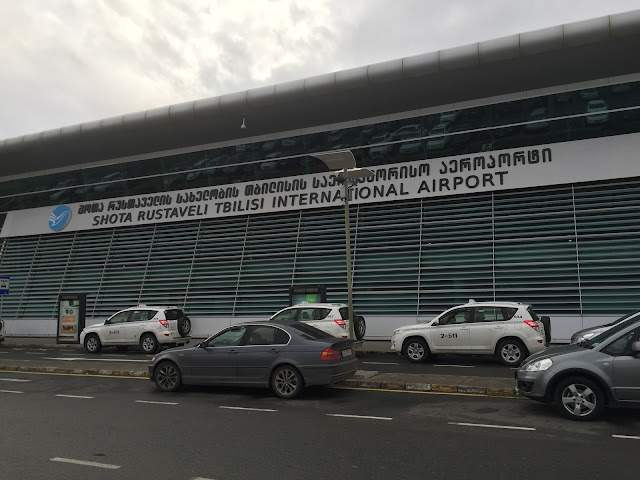 All it took was a long weekend, December 2,3 UAE national day holidays in UAE to trigger this trip. We started on 26th December from Dubai on a FlyDubai flight FZ711 , DXB to TBS. The Flight from Dubai International(DXB) Terminal 2 was at 1.20 AM reaching Tbilisi International in the wee hours 4.50 AM. Since this was my first international pleasure trip there were lots of mistakes and learnings that I would like to share. The first one came just before immigration.

Learning #1. Always Dress sober - Meaning never stick out as a sore thumb when you are in a foreign land. My better half had ignored my cautions and chose to wear a traditional Indian attire a bright blue silk suit and complemented with a bulky overcoat anticipating cold temperatures in Tbilisi. We were well spotted by the immigration staff and cornered off for a deeper investigation to check. But this did not last long as we were just some over excited tourist in our first trip and were let go after some pat down and checking our hand baggages which obviously had nothing to hide.

Learning #2. Always plan your ride from airport to hotel in advance - This is the second learning which we realized later after reaching our hotel. There was some bargain but we were convinced that we had a good deal of paying on 70$ for the taxi ride with a airport taxi driver who seemed like a intimidating huge guy in his small taxi with little or very less knowledge of English. He some how seemed to understand our hotel location which was in the old Tbilisi and rushed us to a street a few meters away from our hotel as the final few meters was too small even for his small taxi to squeeze in. Only later when we checked in our second hotel we came to know from the reception that the trip from airport to hotel should only be around 10-20$ and most of the hotels usually provided airport pickup and drop facility for this nominal fee.

Learning #3. Never believe in hotel photos in hotel aggregators sites - The third learning was not too far. As soon as we reached the hotel that I had booked via booking.com we realized it was more of a work in progress of actually a residential quarters being transitioned into a hotel room. Also we were the only ones in this hotel accommodation who's owners looked like a mother and son duo who again didn't speak English. From the  glaring reaction of my wife who already was irritated after the airport immigration episode was very clear that she was not much amused with my choice of accommodation, lucking which I had booked only for a day and had already paid.

Even though this was my first experience with such things unlike earlier trips which were mostly business/official where my office would have already taken care of my ride, stay and all I had do was enjoy the hospitality. But the feeling of guilt of not being able to plan a trip properly was creeping in and I decided to take a stroll out side the hotel alone. After walking a few steps I could see there were more hotels in the same road and they were far better than what I had booked (believing the photos from booking site..) These ones looked and felt like hotels with reception desk. I walked into one of those and came to know from the receptionist (who for a change spoke english very well) that rooms were available. 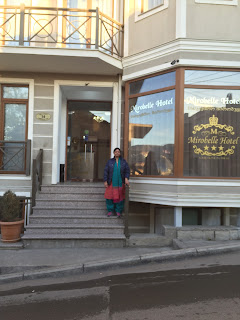 I walked back to my hotel, our luggage was still in packed state so we took everything left the hotel even without asking for a refund and checked in the new one. This hotel (Mirobelle) was neat and clean with great views from the room. Located right next to the holy Trinity Cathedral of Tbilisi also known as Sameba which is the main cathedral of the Georgian Orthodox Church. The hotel hostess "Tina" spoke English and was very helpful.

With nothing much to do we thought of roaming around and check out the city. We somehow reached the local railway station and started enquiring about the train to Batumi. Trip to Batumi which was on the other corner of Georgia near black sea and bordering with Turkey was one of the destinations I intended to visit as well. The ticketing staff too spoke little or no english and we were somehow able to enquire and came to know that there were two trains one in night and the other which starts early morning leaving for Batumi. We decided we will take the one which was next morning as we felt the night one may not be safe. The tickets were for 25GEL (Georgian Lari) which was quite cheap for a 6 hour ride. 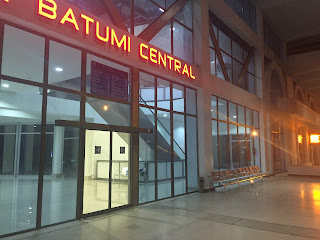 The next morning we checked out our rooms but leaving our luggage and carrying only essential few to Batumi. We had requested Mirobelle to take care of our luggages as we intended to return back to the same hotel after we came back from Batumi.

We reached the station in the early morning and while waiting for the train to arrive saw another couple who seemed to be Indian as well. After the interaction came to know that they (Mr & Mrs Bhaskar) were on vacation as well and were from Abu Dhabi.


Unlike us their hotel in Batumi was booked and they mentioned that it was possible for us to get rooms there if we decide to. We boarded the train and since we had different compartments planned to meet when we reach Batumi station. The ride was comfortable. As decided when we reached Batumi we went along with them and luckily got rooms in the same place they had booked. 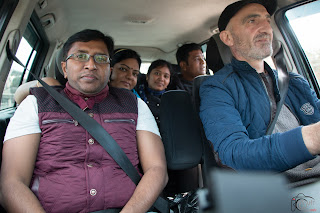 We decided we will book a full day cab along with Bhaskar and would do sightseeing in and around Batumi which included visit to Turkey border, Black sea, Wine tasting , Botanical garden etc., all of which will be covered in the whole day. The trip was quite enjoyable.

It is quite a drive from Batumi to the Turkish boarder. On the way are remnants of  Russian bunkers reminding of the cold war and the scenic black sea. The black sea unlike others has pebbles in the beach and is the only entry point into Gerogia via sea.

Large ships enter via Bosporus. The border connects Turkey with Georgia and has a significant importance as this is the entry point for Trucks plying in and out of Gerogia carrying the essentials. You could also drive into Turkey if you have a valid visa. The border seems to be a very busy one with lots of vehicles coming in and leaving throughout the day.  With black see in one side and mountains on the other it is very strategically placed. 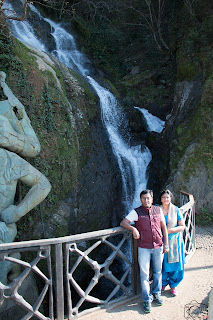 Usually people visiting Georgia land in Tbilisi and fly out from there after seeing Tbilisi. I would certainly recommend that people should travel to Batumi. Batumi is entirely different when compared with Tbilisi. While Tbilisi still seems to be a old city , Batumi is beaming with activities and has mountains, waterfalls, high raises, large hotels right next to black sea, casinos and a great night life as well. It has a little of everything in a very calm setting. 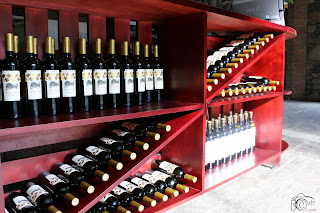 Wine tasting in Batumi - Georgia is famous for its wine and there is wine making in Batumi as well. You could visit one of these factories where you could do wine tasting and buy some as well. I got a chance to taste the wine here in Batumi but did not buy any as I had no intentions to carry some into Dubai.

An Evening stroll in Batumi near the black sea you can see local men fishing. The people out here in Batumi are very friendly. 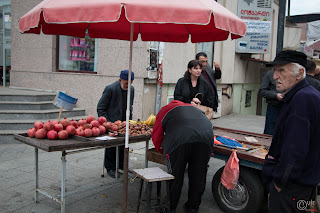 Being so close to the shores of Black sea there is a nice breeze through out and I found this place relatively safe for tourists although I would always advice people visiting any new place to ensure some level of alertness and not fall prey to any scams. The local markets out here in Batumi sell fresh fruits and freshly baked breads. I was although surprised to see young kids begging for money . This could be a recent trend which is a result of tourists who might have encouraged this habit.
You can find bakery in the market selling freshly backed breads and its worth a try . 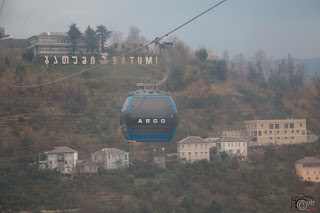 Do not forget to visit the cable car which for a nominal fee of couple of Lari lets to get to the top of the nearby mountain from where the whole city of Batumi along with the black sea could be viewed. 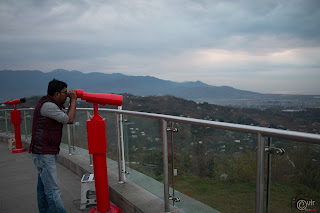 The top also has some telescope in case you would like to have a close view of some parts of they city. But do not forget to carry some loose change as these are coin operated. 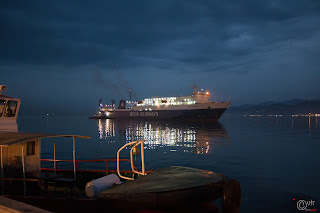 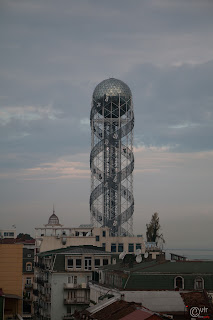 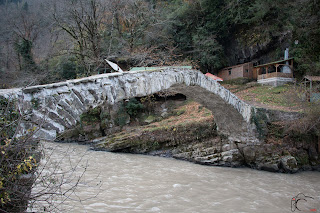 After an exciting two days in Batumi we returned to Tbilisi. The return journey again a comfortable train in coaches equipped with big seats and internet connectivity.

We took a taxi back to Mirobelle and were happy to get the same room with view we had initially stayed before leaving to Batumi.


There are lot of local sight seeing in and around Tbilisi and we decided that we will do this with City SightSeeing Tbilisi. They offer a lot of day trips in the double decker buses as well as small vans as some of the locations are on mountains and its convenient to travel using these small vans instead of big buses.

As such there are lot of places we can visit each of which takes a whole day. 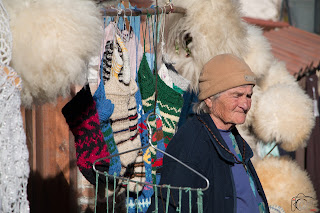 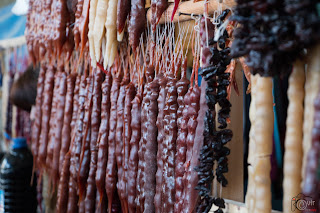 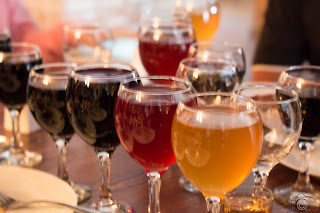 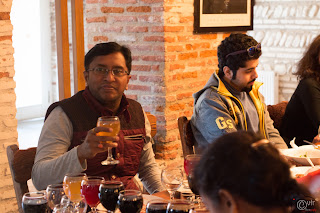 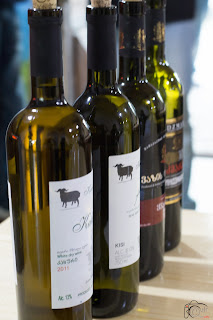 Even though everything about this trip was unplanned and a new learning with lost of surprises, after all whats a vacation without any surprises.  Too much of planning spoils the fun and in our subsequent vacations we have already realized that such trips should have some minimum things to be taken care off and rest should be left to be taken as challenges/surprises.